What is golden rice?

A japonica variety of rice was engineered with three genes necessary for the rice grain to produce and store beta-carotene. These included two genes from the daffodil plant and a third from a bacterium. Researchers used a plant microbe to ferry in the genes into the plant cells. The incorporation of these genes allows the rice plant to modify certain metabolic pathways in its cells to produce precursors of Vitamin A, which was previously not possible. This was considered a technical milestone, as most agronomic traits engineered to date have only required the introduction of a single gene. 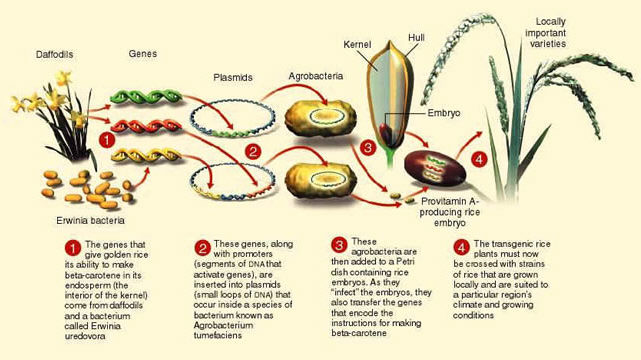 The Golden Rice project, which began in the early 1990’s, was a result of a collaborative effort between the Swiss Federal Institute of Technology (ETH-Zurich) and the University of Freiburg, Germany. Ingo Potrykus and Peter Byer are its main developers. Funding was obtained from ETH-Zurich itself, the European Commission’s agricultural research program, and the Rockefeller Foundation.